A paramedic from Pretoria was seriously injured on Friday when he was attacked and stabbed 28 times for his wallet.

Nico Stapelberg was returning home from a business trip to Northern Cape when he pulled over at a cafe to buy refreshments on 25 October.

“The next moment four men came from nowhere and demanded my wallet,” Stapelberg explained.

“ I was still in my uniform when the attack occurred.”

He says one demanded his cellphone then stabbed him numerous time with a sharp object before fleeing.

Stapelberg climbed into his car and drove in search for help.

“While I was driving i did first aid on myself. I also inserted my own drip.”

He managed to get ahold of security company from Orania who assisted in getting him safe to the town where he was stabilized before he was taken to the Gariep Medi Clinic in Northern Cape.

Stapelberg was in the intensive care unit until Sunday and is currently recovering in a general ward.

It is expected he will be discharged later this week.

Stapelberg said he will continue to make a difference in people’s lives through his work.

“Again I saw that basic first aid can save a life. I will never stop.” 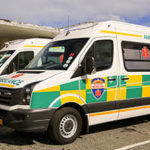